Well, I guess when the dog is a puppy it makes a big difference.

This week, after long years of wanting a dog, and not being in the right place for it, finally got one. It was a little unexpected. I have a friend that had this pup for the last four or five months, and she's also pregnant. Well, the further she progressed in her pregnancy the harder it got to take care of a new puppy and actually train her. So I offered, if she ever wanted to get rid of her for any reason, I would take the dog. I had fallen in love with her the minute I saw her, but hadn't realized what I was getting myself in for.

I haven't had a puppy since I was 10 or 11... it was the only dog I've ever had and we only had him for that one year for various reasons, one being that the dog was too big according to the place we were living at the time. Even if that hadn't been a factor, I'm sure that we would have had to give him up at some point due to the fact we ended up moving a few months later, back to Kansas after my mom filed for divorce.

I didn't think it would be that bad. My nephews were fairly easy to handle, though I have to admit, having them for a week or a weekend is a little different than having someone in your home permanently, chewing on things and messing up your carefree life in general. I'm good at being the aunt. And that may be part of the problem. I've gotten so good at the temporary responsibility that any long term commitment to anything that needs my attention that doesn't involve a paycheck or some means of survival and comfort - like clothes and my apartment, well, I could commit to doing said activity for a short term, but long term, or for the rest of my life... oh hell no.

So this week has been a little rough on me. Maybe the dog too.

Oh and did I mention - Lily, my dog, is deaf. I knew this, unlike her previous owners, I was warned and did a lot of reading and research before I went to pick her up.

In one week, we've learned signs for sit, stop, no and quiet. I'm working on her name sign, drop-it, and poo (this is a long shot, but worth trying to teach her I think - she gets distracted on potty breaks easily... ). Sit was an easy one and one she mostly understood already. Stop and No in combination with a biting motion have taken most of the week for her to pick up on, and only when she is really paying attention.

(Pause in writing to check on the dog)

(Ok, back now - apparently the dishwasher made her curious so she's been keeping an eye on it since I started it this morning)

The one she knows and absolutely hates right now is 'Go in the Crate'. I make the hand motion for that and she practically bolts every time now that she knows what it means. She is crate trained, she just realizes that it means I'm leaving for work or she needs to go to bed for the night. I wish it could be more her choice instead or she would be willing to go in her crate when I need her to, but I think that's just going to take practice and training. She'd rather be in my room but when I need sleep to deal with her, it's hard to put up with a playful pup that doesn't understand what bedtime is.

Socializing her with other dogs was great though. Last night we were at a friend's house and she managed to get along with both of their dogs after a while. The larger dog was much more sociable than the smaller one. We call him the grumpy old man - he doesn't like new things or younger dogs. Lily didn't know about territorial instincts really, and this dog taught her last night. I one night my dog learned who she could socialize with and who would tolerate her. It was a good lesson to learn considering she usually would take off after any dog she saw, or sit and watch them. When we got home from the friend's house, a couple of small dogs were waiting just out of range of where I parked my car. We got out and she sat down in front of me and started growling back, when they growled at her. She - for the whole week - no matter what happened, had never growled before. Barking sometimes, but not growling. She learned last night. This I think is kinda awesome. She didn't know really about how other dogs respond to other dogs. The instincts were there, but never practiced or learned. And it calmed her down quite a lot - today she's practically peaceful compared to what the week has been like.

We've had accidents and frustrations. Having to go to bed early to wake up early and get a routine down, but most of all, this whole week only proves to me that yes, I can handle this commitment.  (Though yesterday I was sure I was going to put her up for adoption. Thought really hard about it!!) Also, that she is really really smart, given the chance, given the motivation, she understands and learns very quickly and I think that is what keeps me working with her, and understanding her so that I can communicate and she can understand me.

It's the first long term commitment I've taken on in some time. I find myself, at least now, looking forward to things, knowing we'll get frustrated with each other from time to time, but that eventually, we'll be good friends and she's part of my family unit. 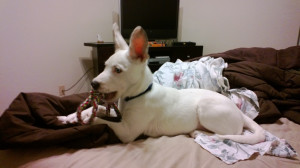 Ok, so it's been like a month or so since I posted... hell since I wrote anything. I've been stupid crazy busy, and made lotsa dough which is awesome, but I need something creative going on or I'm going to e'splode!! So with that in mind I'm probably going to start posting again, hopefully. There has been soooo much stuff going on this last month I don't know where to start, and I'm frankly, not even going to try. The highlights are - LOVING Texas.. working days again (YEAAAAHHH!!).... my apartment freaking rocks my socks... and boys.. and girls.. and boys and girls.. heheh

SO! - on with the creative I say... and the occasional crazy late nights and the wonderful blurbs of stories and ideas that just won't leave my head. And all the crazy stuff I have planned which almost makes me tired just thinking about it. :)

Oh - lol - almost forgot - Growing up, hated citrus in all it's many forms.. now I can't get enough of it. I have no clue why. It's weird. Hence the title. And avocado.. it's awesome.. enough said.

The first TEN people to comment to this post get to request that I write a drabble of any pairing/character of their choosing. If they like, they may post this in their journal, regardless of their ability level. (If you absolutely can't write, maybe find a creative alternative?)

Really, I'll give a shot to anything. Let me know what you want, what you need, what you crave! I'm up for it... Everybody I'm f-listed with know a little about me to know what I'm probably able to write about.. give me a topic and I'll give it a go... fandom's are perfectly acceptable :) Though give me a couple of options if you go that route.

Castle: 'No time for dirty talk. Now go get changed.'

HEH - I do believe 'Fool Me Once' is now my favorite episode thus far. I loved how they used a STFU but didn't. Really - I kinda want to see the out takes.. those have got to be freaking hilarious!


Friday night should be fun. Getting together with B to have some dinner and see Whip IT! *grins* It should be pretty good, and I'm looking forward to it because it's a Roller Derby movie. (And has to be better than Solar Babies which is the last movie I saw with a lot of skating in it.. no wait that's not true.. Roll Bounce was. That one was pretty good actually)

Saturday is going to be a little up in the air and I think Sunday is probably me, hanging around home doing home stuff. Maybe some shopping if the mood strikes.

For now I will wish for next weekend in which I have a pedicure planned and possibly the purchase of a PS3 slim which will include the latest incarnation of Rock Band and Batman Arkham Asylum. And maybe.. just maybe the whole Star Trek movie set on Blue Ray.. hehe.. because it's awesome and on sale!! *grins* - eh. Or I'll probably just fret over spending that much money and wuss out.

Because one is never enough.. for oh so many things.. *chuckles* Which means, here are the rest of my meme items. And I have learned a good lesson (which I will probably forget in the near future), in which I probably should not take on meme's that can't be answered in one post. I suck at making daily posts. I'm just too damn busy sometimes.

But speaking of busy - wow OT is killing me this time. I'm not sure if it's the change in weather and the overwhelming need to want to borrow under the covers and never show my head again or if I'm trying to get sick and I'm fighting it off but its causing me to be tired all the time. Either way, I'll be happy when these three weeks are over this month. And then I'll have it to look forward to in January, unless something changes (which it might.. which it might.. but need to keep that under my hat for the moment).

ON with the MEME!!

A favorite site of mine.. or well a couple actually -

http://leasticoulddo.com/ - The Least I Could Do - Very funny, upbeat most of the time, and great contents of sexual humor. Also, this same group does Looking for Group which is a very cool web comic as well.

http://xkcd.com/ - XKCD - And if you're a science or math nerd/geek that hasn't found this web comic yet. Well, you're behind. This is an great comic with science humor and I would point out that you should always mouse over it to read the comment. ALWAYS!

If you haven't seen it yet - do. I'm a geek. So this should make sense once you watch it. And I was in choir for like my whole educational experience to this totally awesome to me.

And apparently it's inspired other groups to do similar things with other stuff. *grins*

"The great tragedy of Science - we slay a beautiful hypothesis by an ugly fact."   - Thomas H. Huxley


As for the random thing.. eh.. this whole post was probably random enough *grins*